This specification is a DRAFT

Note that these terms apply whether they are uppercase or lowercase and no matter what styles are applied to the phrases.

What is in scope

What is out of scope

The following referenced documents are necessary for the application of the present document.

The following referenced documents are not necessary for the application of the present document but they assist the user with regard to a particular subject area.

Beacon - A fixed device in a location that provides location-specific information. May be called a Bluetooth Beacon.

Big Endian - Also known as ‘Network Order’. A way of encoding numeric values for transport over data networks. Bluetooth (and most network protocols) are Big Endian.

Herald Project - The opensource contributors and maintainers of the Herald website, code, and standards documents.

The below are the constraints placed on the design of the system that the rest of this standard is defined within.

Overview of Roles in transmission

The detailed explanation is below:-

The Transmitter’s health authority knows, from the transmitter:-

The Receiver’s health authority knows, from the receiver:-

The transmitter’s health authority posts the below to all phones it manages (MUST BE WITHIN 30 MINUTES):-

The transmitter can now:-

Health authority and mobile device have a way to rotate and fetch server public/private keys and symmetric key exchange should the server keys become compromised. This is down to the national health authority to implement in their own app.

What attacks does this prevent?

Where did this idea come from?

Diffie-Hellman-Merkle should be used over an encrypted channel between each mobile phone app and its health authority to exchange cryptographic material between mobile and health authority servers that allow a mutually agreed symmetric key to be created without interception. This key is used to secure all communication between mobile and health server, like a password, but instead of directly being used should be used with TOTP to generate a one time use key per request. This prevents well funded actors breaking Diffie-Hellman-Merkle protected exchanges through pre-calculation of factors as they do not know the mutually agreed epoch. In the same way a client UUID can be generated.

Optionally, in a very centralised system with lower privacy guarantees, the rotation key (TOTP password) derived from this symmetric key is used as the transmitter persistent UUID (NOT the bluetooth ClientID). This should not be necessary, however, as all epidemiological data is provided without this needing to be done.

Time based one-time password is used in several areas, but with different source material:-

Kerberos was used as inspiration for the method of token passing and validation without communication between the health authority and trasmitter each time (and thus loss of privacy). The difference here is that each transmitter, NOT the health authority server, acts as its own authentication authority, and treats the health authority it belongs to as a ‘Service’ provider (hence the term exposure service token).

The transmitter also treats itself as a service provider, so it can verify the exposure record later on. The receiver phone is regarded as a ‘client’ of both the transmitter and health authority exposure notification service.

This would of course potentially identify this transmitter as the hitherto anonymous end of the contact graph, identifying both ends of the contact event and linking the persistent UUID forever to a known real transmitting device, if both transmitter and receiver are from the same health authority.

It is important, therefore, that when an app becomes aware of being dangerously exposed, or notified that its user could be a super spreader, that it doesn’t immediately declare itself as in this state. It should lag this status update by a random time period of up to 30 minutes.

Links to prior art and further reading

The below figures are also shown inline within the standard document. 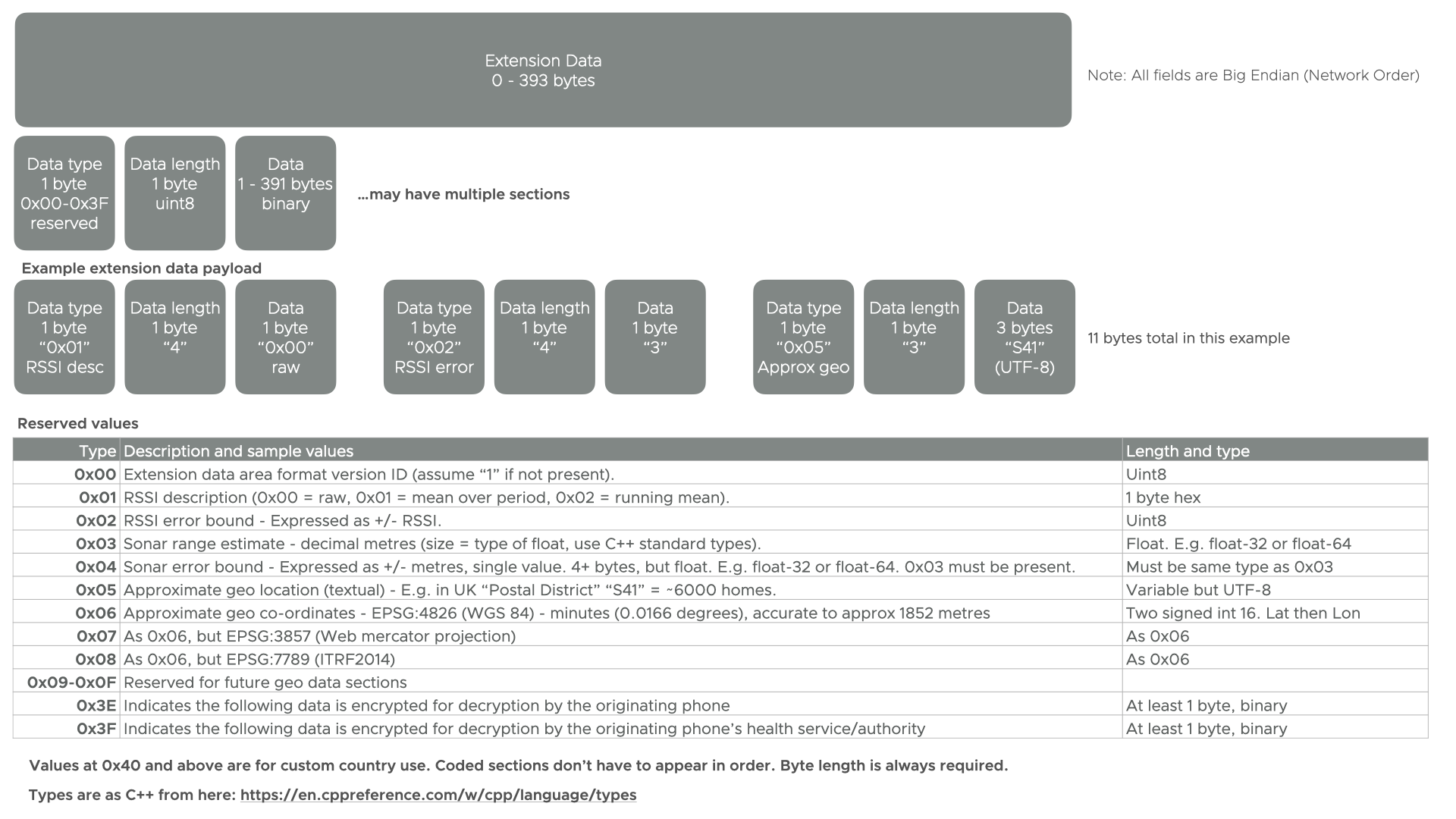 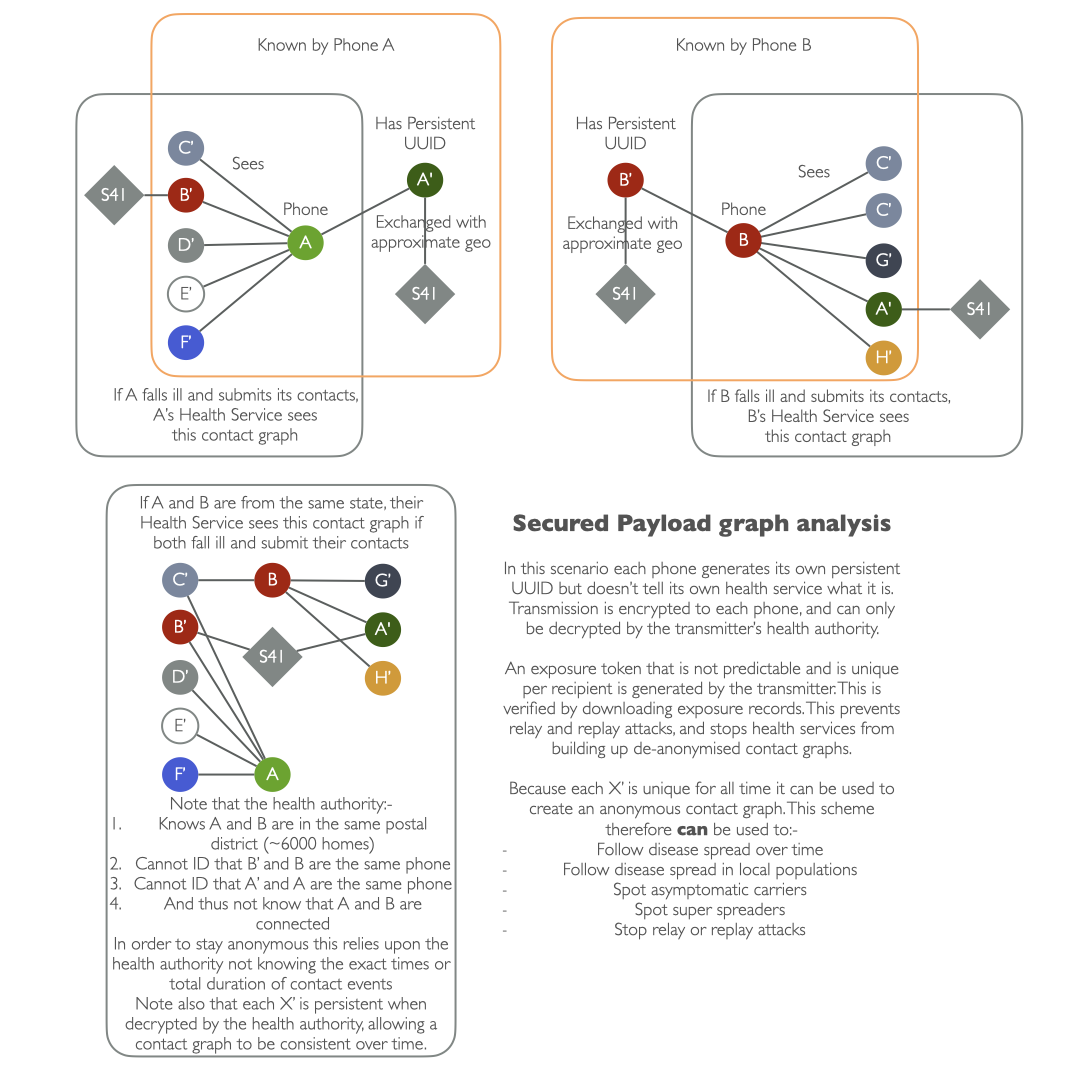 The below is the version history:-