Contact Tracing is not a new process. It is about asking an individual who has fallen ill to list the people and places they have been to in order to find, isolate and test other people who may be ill before they can spread a particular illness more widely.

What is new is using technology to perform Contact Tracing. A team from Cambridge first did this for a Flu outbreak in the mid 2000s. This used an older version of Bluetooth which was power hungry and so was not more widely adopted at the time.

In 2020 many worldwide teams are developing Bluetooth Protocols to perform mobile app based contact tracing. This involves having an app running on your phone that is constantly talking to other nearby phones during the day. By swapping identifiers these phones maintain a virtual, and pseudoanonymous, list of your contacts.

Below is a diagram showing elements of a contact tracing system beyond just the app:- 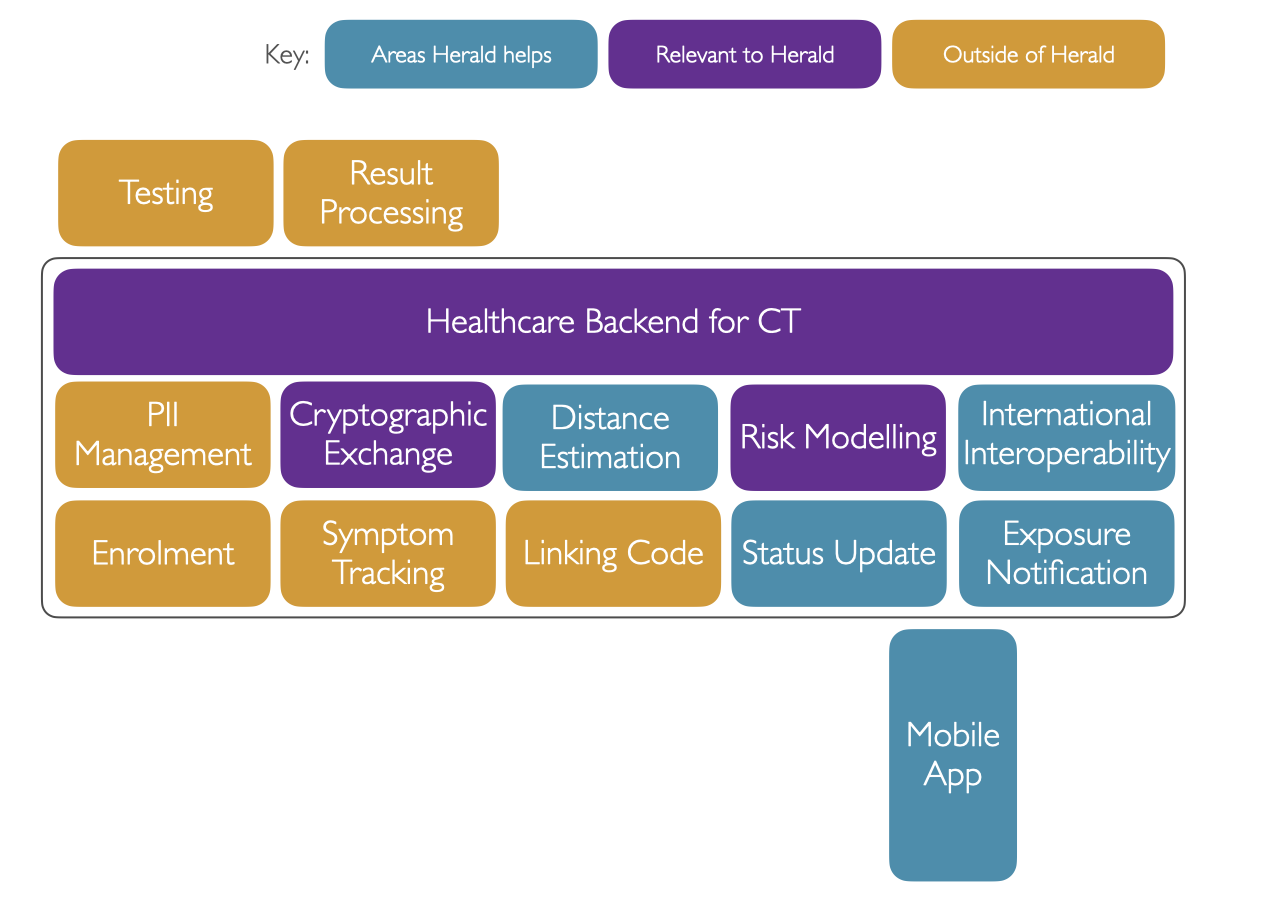 Logging relative distance also provides a richer set of data in order to estimate risk upon. An app can also accurately measure the duration of a contact rather than rely upon human memory. This too makes the risk calculation more accurate than relying on human memory.

Some diseases, like COVID-19, also have a very long period where you can be spreading the disease prior to showing symptoms. COVID-19 has a 95 percentile probability of showing symptoms only by the 14 day period. This places a very large burden on human memory especially for those with busy lifestyles that commute and meet regularly. These people are also those moving about most, and thus are most likely to widely spread a disease.

There are also edge cases where a psudeononymous app is beneficial. People at risk of domestic violence if they reveal their movements in an interview that is overheard is one risk. Another is that of super spreaders. These people more readily pass on diseased than others. It could be a simple brief encounter of passing them on the street that infects you. In such a circumstance no manual contact tracing method could help - you simply pass too many people on the way in to an office to trace.

Interventions can also be aimed at individuals who are at risk rather than pre-emptively locking down entire groups of workers in an office, whole towns, or states. In a centralised system health authorities could also garner information on general population mixing in specific towns and track a virus’ spread in advance of people falling ill. App based contact tracing can therefore be very useful in prevention.

Whilst app based contact tracing is unlikely to replace manual contact tracing, it is certainly a very useful and specific instrument in the hands of a health authority.

Clearly if an app was sharing very personal information like your name and healthcare identifier as you were walking around this would be a very big privacy concern. Mechanisms have to be used that preserve the privacy of an individual.

Pseudononymous identifers, rotating keys, and encryption are all methods used within contact tracing applications. Whether these are associated with any healthcare identifier or personal information is a decision best left to particular societies.

In our Payload specification we suggest a general payload that can be used for both centralised and decentralised approaches, with or without linking to a healthcare identifier. This also supports international interoperability. Using such an approach will allow local countries to make their own decisions on where to draw the line whilst allowing for a maximal health response.

Also clearly an issue is having a device that is capable of running a particular protocol. Our Protocol supports 97.5% of the population and the handsets they use. Other protocols relies on particular technologies, or mobile operating system versions, that greatly reduce this reach by 30%.

Also anything electronic has battery life issues. Bluetooth Low Energy since June 2010 has much lower battery use. It’s important to take regular distance estimations in a contact tracing app, but also to not do so often enough to run the battery down. A full day needs to be supported. Our protocol has been shown to only drain the battery by 6-11% over an 8 hour day. That’s less battery use than WhatsApp on your phone!

Western countries like the UK have a population where 98% of people own a phone with Bluetooth Low Energy support. In other countries this will be lower, which is why manual contact tracing is still important.

The idea is that people run an app on their phone and keep it running at all times in the background as they go about their business. During the day this phones is regularly advertising the fact it’s running a contact tracing protocol to other devices nearby. Non contact tracing apps ignore this advertisement, but other contact tracing apps are specifically looking for it.

When another phone discovers this advertisement it will record the pseudonymous identifier of the other device and then regularly take distance estimation readings. Using Bluetooth this is done by using the RSSI signal strength indicator. These readings are then stored locally on the phone for around 14 days.

When someone with an app falls ill they are asked to share their status and recent identifiers. These are then matched against others’ recorded data to determine others’ risk exposure. Any people who exceed a particular risk threshold will typically be given advice to self isolate and get tested.

There have been two terms that aim to describe contact tracing approaches. These are centralised and decentralised. Every contact tracing system necessarily has a central server to link an individual (whether identified by name or healthcare ID or not) back in to the health service. What “Decentralised” actually means is “Ensuring the health authority cannot have a full contact graph such that this information can be abused by another part of the State apparentus”. E.g. for restricting freedom of movement or assembly, or law enforcement location/social tracing.

The downside of the pure decentralised approach is as follows:-

A centralised system allows all of the above problems to be countered.

It is up to individual governments to decide which level of risk is more of an issue to their populations.

Our suggested Herald Secure payload strikes a middle ground here, providing a predictable ID and graph to the state, but with only one side of the contact graph shared. (When the ill person submits their data) This approach also counters spoofing, relay, and replay attacks and is more secure than the pure decentralised approach.

There are several steps. They are as follows:-

The final one, Tracing, and how it occurs is determined by the mobile contact tracing application using the protocol that is provided to a particular state or countries residents.

Below is a diagram of an end to end contact tracing system flow:- 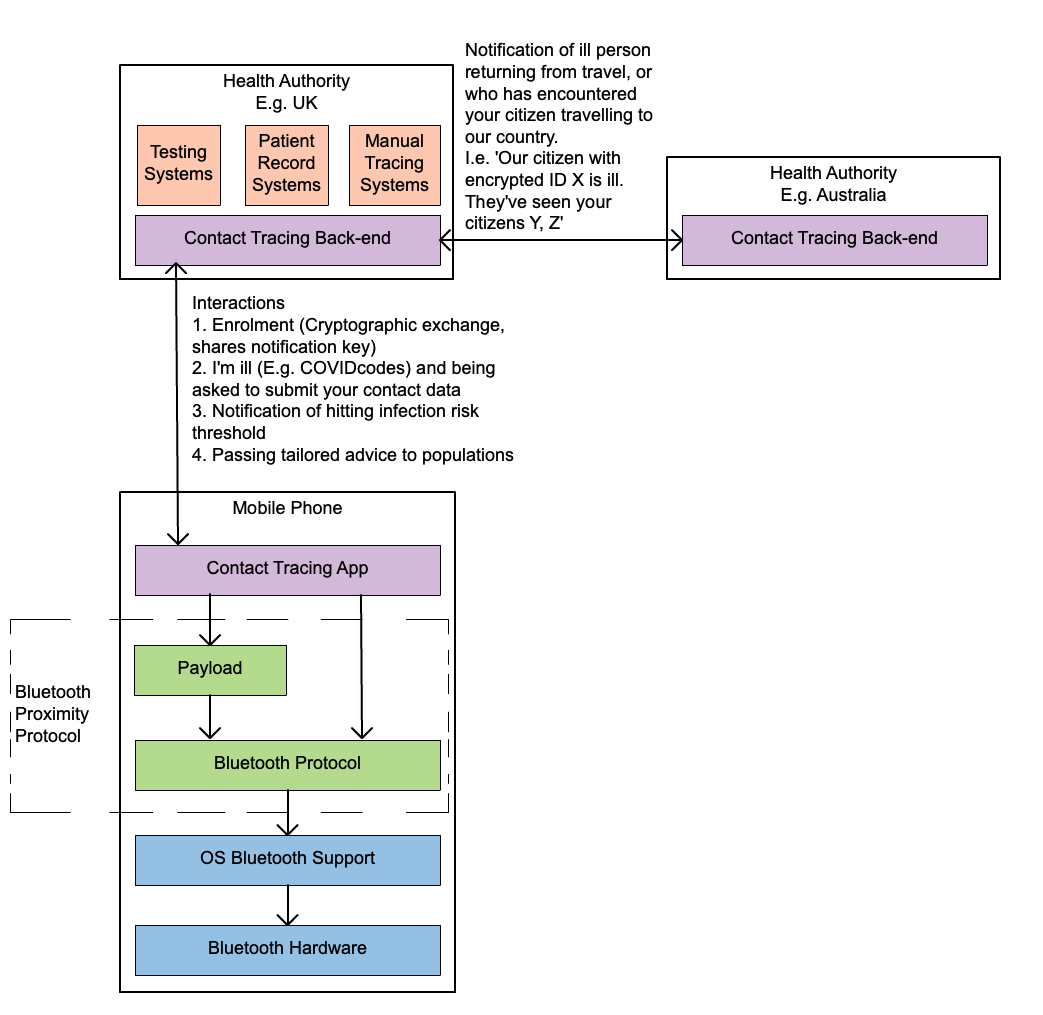